The Queen gets a Spa Day

Posted on August 13, 2013 by spinweaverbarbara

Finally back in my home studio and re-united with my main loom, “Queen Grump-a-Lump-Bump”, named for the sound she makes as the weaving progresses: grump-a-lump-bump, grump-a-lump-bump.  The treadle is stepped on, the shafts raised, the shuttle thrown, the treadle released, the beater beaten.  Repeat and repeat.  The rhythmic sounds of the loom carry me through my weaving journey as soothing as a train rocking on the railway tracks would carry me across the country.

The Queen has reigned supreme over my various weaving studios through the past thirty years.  She was built for me by my father-in-law, Don Mitchell, in 1982 using the book Loom Construction by Jeri Hjert and Paul Von Rosentiel. She has served me steadily since then.  She is a simple 4-shaft loom, efficient and steady.

After sitting quietly unused for the past six months while I have been away, The Queen was dusty and stiff, and as the name implies, more than a little grumpy.   “You have neglected me,” she accused, “and you need to make it up to me!”

I dusted and cleaned, and rubbed her down with Orange Tree Oil.  I tightened all her screws and bolts, and nuts, and washers.  I re-hung the shafts and worked until she glowed.

“Thank you,” she said, as she gleams with pride once more in the centre of the studio room floor. 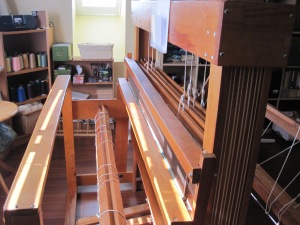 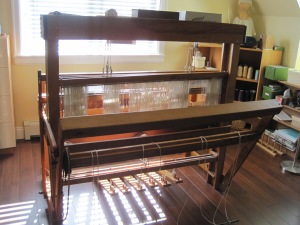 I have been steadily weaving since 1980. I enjoy sharing and passing on my learning.
View all posts by spinweaverbarbara →
This entry was posted in Uncategorized and tagged Canada, Loom, studio, Textile, Treadle, Warp (weaving), Weaving. Bookmark the permalink.