Posted on July 6, 2020 by spinweaverbarbara

Over the last year or so, I have been working through a series of scarves in Overshot and exploring the variations of this weave structure.  In today’s scarves, I have been influenced by the lessons of Jane Stafford and her Online Guild, which introduced me to the concept of using silk weft on a cotton ground, and the concept of overlay.  Another strong influence was Robyn Spady’s workshop “Extreme Warp Makeover” where we explored using many variations of weft and treadling on a classic weave structure.  Both great teachers.

For these two scarves, woven on an overshot treadling, I considered the traditional Overshot structure where a coloured pattern weft is woven over a solid neutral plain weave ground.

For this study, I thought, what would happen if I start with a plaid as my ground cloth.  This one has a blue square in each corner, intersected with a yellow stripe, and two red squares in the centre, bordered by black stripes.  So, red, yellow, blue and black are the colours in play.  The warp is 2/8 cotton, sett at 18 ends per inch.

For tabby weft I chose Bambu 12 in colours similar to the warp.  Bambu 12 is soft and drapey, very light in weight, and about half the gist of the cotton warp.

For pattern weft, I chose 2/20 silk, which is about the same size as the 2/8 cotton, but stands out as the pattern weft because of the way it picks up and reflects the light.  The pattern design is called Orange Peel. 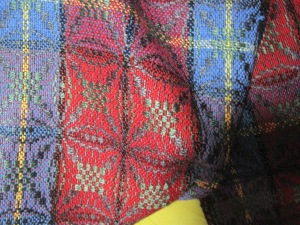 For the first scarf I chose Black Magic, 2/20 Tussah Silk, and dark green Sitka Spruce, 2/20 Bombyx Silk as the pattern colours.  Some of the pattern motifs are woven in just one colour, others in a combination of both.  I wove the pattern “tromp-as-writ”, star-fashion, with the tabby weft following the warp colour order.  Understated elegance.  In the first photo you can clearly see the blue corner squares, the centre red square and the yellow and black accent colours creating the plaid.

For the second scarf, Robyn Spady’s influence came out to play.  I wove the overshot pattern in a “what if, as if”, manner.  What if I switched colours as I went along?  What if I treadled the pattern as if it were summer and winter, or as if it were twill or monk’s belt, as if it were crackle, as if it had extensions, was treadled in rose fashion, or treadled in inverted order?   Skip the plaid squares, alternate sections of blue tabby and sections of red tabby.  Then add in some transitional stripes to separate the motifs.  Woven from bobbins of bright, colourful 2/20 silks leftover from other projects it became a joyful, jubilant song.

I have been steadily weaving since 1980. I enjoy sharing and passing on my learning.
View all posts by spinweaverbarbara →
This entry was posted in Weaving and tagged colour, cotton, handwoven, JST on-line guild, Overshot, Robyn Spady, Scarf, Silk. Bookmark the permalink.

6 Responses to Overshot on Plaid